This guide covers available information about stats and various calculations performed with them, that are available in current game version [0.113].

Table of Contents (link to sections)

Character can deal damage in many ways, using many different types of skills or stunt skills. These formulas that will be mentioned in this section are only used for calculating base damage, without applying any other stats like parry, critical etc.
Characters base land damage depends on several stats. They are:


As mentioned above, general formula will only use those stats. All other stats and effects are applied after.
General formula is as follows:

In which ADB is calculated using next formula:

In which value of DB - DR is calculated using one of these four different formulas:

Step 3.
- take the solution of step 2. and test out which criteria it matches.

We are going to use the number -70 for calculating ADB.


Step 4.
- calculate ADB using the value we calculated in step 3.

Parry has a chance of reducing the incoming damage by some percentage. The formula used to calculate the percentage of reduced damage is unknown.

The formula used to calculate the chance of activating is as follows:

Graphing the formula above, we can notice the graph has an asymptote at 100%. Its slowly approaching it, but never quite reaches it. This basically means that no matter how many parry character has, it will never reach a 100% chance of activating. We can also see that the graph grows more rapidly on the interval between 0 to 500, while it grows more slowly on the interval between 500 to 1000. This means that adding 500 parry from 0 to 500 will increase the chance of activating by 50%, while adding another 500 parry from 500 to 1000 will only increase the additional chance of 16%. 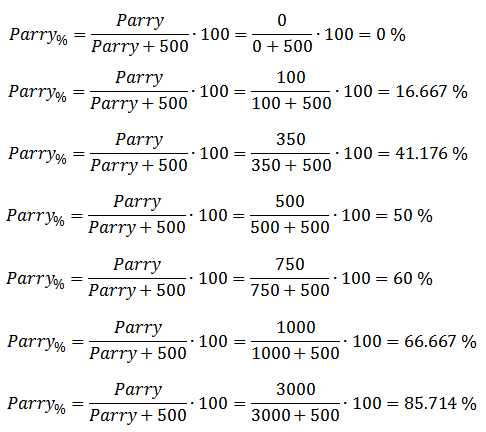 The formula used to calculate the chance of successfully hitting with a skill is as follows:

Rage of God damage depends on two factors only:
ATT - attackers attack
coefficient - a number which depends on profession skills and character skills


The general formula used to calculate Rage of God damage is as follows:

In which coefficient equals to a number which value depends on character skill levels.
Possible values are:

Sword Dance is a special skill available from Sword-playing skill. Sword Dance takes characters base damage and multiplies it by some coefficient, dealing X times more damage in one hit.


The general formula used to calculate Sword Dance damage is as follows:

In which coefficient equals to a number which value depends on character skill levels.
Possible values are:

Ramming is a stunt skill available from Sea Battle skill. Ramming skill is used to ram the target and cause damage. Faster the ship goes and more ramming force it has, more damage it will cause on the opponents ship.

The general formula used to calculate Ramming damage is as follows: