AS of 2016 you DO (still) have to pay money and buy a map then equip it on your character to be able to enter.
You do NOT get a treasure box

You Do need to be in a team
I do not know if the minimum profession level of 80 is still required or not..

To kill or just hit the boss Protection Beast you need at least 600 Accuracy.
(there are 4 beasts so you may do the quest with more than 5 players without starting a new map)

To enter the instance you will need to pay 2 million silver to the NPC standing close to the entrance which is located in Zhigu suburbs, at the top of the stairs leading to the mausoleum.
This instance has 2 floors. To complete the daily task you have to kill the Protection beast on the 2nd floor.

There are 2 ways to get to the 2nd floor to access the protection beast.

1) the easiest way: Fight your way through clearing the floor of all monsters....to the npc that sells the shovel (see map below).  Avoid going toward the hallway where the 4 dots are.  One team member  can buy the shovel for 1.5 M and equip it... then RUN (the shovel disappears in 2 min) to the pile of rock at the cave entrance (see green text left side of map) and they enter first.

2) you can avoid buying the shovel by fighting your way through the hallway where the 4 red dots are.This mob is extremely strong.  The  monsters are the same as the very last one you encounter when you get to the shovel npc.  But instead of just one, you are attacked by a mob of 6+.  The first floor may also has a boss (I have heard he is much harder than the protection beast on the second floor) But I have not been through that way.

On the second floor you will be immediately attacked by about 6-7 soldiers. Kill them and you will have a short reprieve.There are 4 protection beasts on the second floor, but you only have to kill one to complete the task.

The easiest way to kill a beast:
Have a team of 3 people.
Before you go around the 2nd bend in the entry hallway have your strongest player lead the way to yellow dot # 1.
(Sometimes just walking to that spot will spawn monsters)
When you reach yellow dot #1;  One member will need to have a gun at stand at the yellow dot #1.   The 2nd team member will stand in hallway behind the person with the gun.   The 3rd team member will lure the beast so this person should be your strongest player. 3rd member will RUN with passive attack off... into chamber with red and blue dots...or possibly further back until they find a protection beast...
hit the beast once and run to yellow dot #2 and stand there not hitting back. (he will have many monsters hitting him)
Player 1 will shoot the beast continually  from where they are.... player 3 may have to move to get beast from behind a wall so player 1 has a clear shot.   So if you use team speak or vent this is easier...
Once player 1 is sure his shots are HITTING the beast he tells player 3 to quit team.
After player 3 quits team and VISIBLY disappears from scene and all monsters will run away..except the guardian beast.  As long as player 1 is still shooting,  the beast will be stuck swiping at nothing.  Now either player 2 or player 1 (switches to close combat weapon) and runs up to beast.. hitting the beast once and dragging them to yellow dot #3.  (there is enough time for the person with gun to run up to beast switch weapons and hit the beast before he walks away)
Team leader then re-teams player 3 and all players attack the beast.  Player 3 will have to run in from outside the instance.

Stronger players can solo the beast, and I have seen high level player use a pet to hold the mob while he hit the beast then put away pet and mob left...He also used a profession skill I think CP or TH has... I am unsure of the details of this method as it is not my profession.

Note; you can also exit the scene by mousing over the wall where the green dot is.... the exit door is so close to that wall you can access it through the wall. 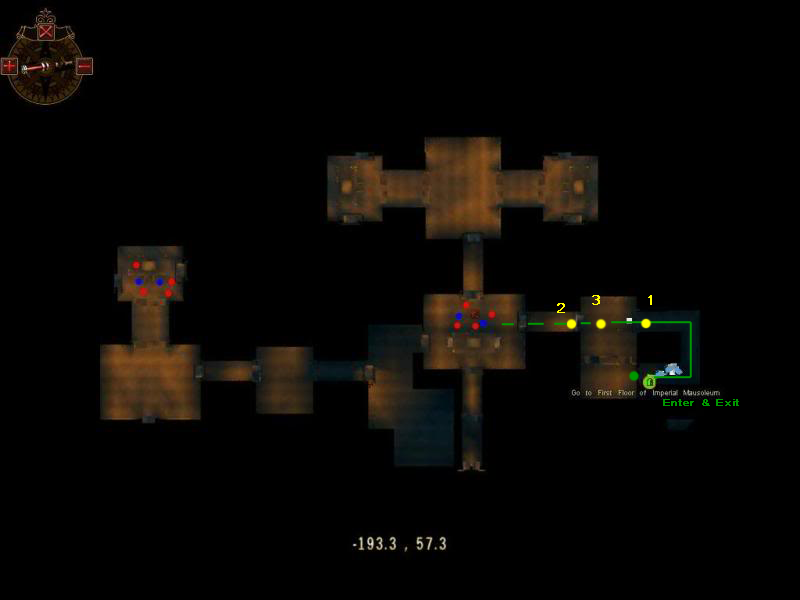