Uniform Repair:
Only level 55 - 120 (Superior)  can be player made or player repaired and returned to their full maximum durability.

NPC's (Blacksmith, tailor, etc) can repair your uniform or hat but they will loose maximum durability that can only be recovered if it is a (Superior) uniform or hat and repaired by a player who has learned the drawing.


Where to get uniforms and hats other than player made:


Suggested option after that:
1)  Use a bad attribute transfer item to put your 100's attributes on to your 115.
or
2) "pimp" the 115 with regular refines if you have access to IM
or
3)  just use the super "pimped" level 100
or
4) You can get the free 120 uniform from the knights vigil quest...but if you have used a lot of refines on your 100... use a BAT to a 115 then upgrade the 115 at he Atlantis stowaways so that you keep all your refines...
You would have to use a (regular) Attribute Transfer item to take the 115 stats to a already existing 120,  And. Regular Attribute transfer items are EXPENSIVE (real money).


Upgrading 115 to 120:
115 Uniforms and hats can also be upgraded to 120 instead of just creating 120.  When you upgrade, the Uniform or hat keeps all its extra refined stats that you add on the base stats...
example:  if you add reaction , technique or physique , you will loose those extra stats when you upgrade.

To upgrade  LAND Uniforms and Hats
Go to the NPC named Atlantis Stowaway on Seville Dock near the bottom of the ramp that leads to the Trader.
Approximate coordinates (51, -19)

To upgrade 120 Sea Uniforms and hats from (Superior) to (Perfect)
Go to the NPC named Knights of Malta Reinforcements in Genoa Port.
Approximate coordinates (88, -51)

You can compound using 100, 75, 50, and 25% success rates.  Material requirements will differ.  But it is not recommended


Uniform (Armor) and Hat (Helmet) Statistics
(Pictures of Superior Uniforms and Hats stats are in the next 5 posts)
All profession uniforms and hats no matter the profession (AB. CP, EG, TH, RMO) have the same stats for every level
so the "armor name" will vary but the base stats are the same. 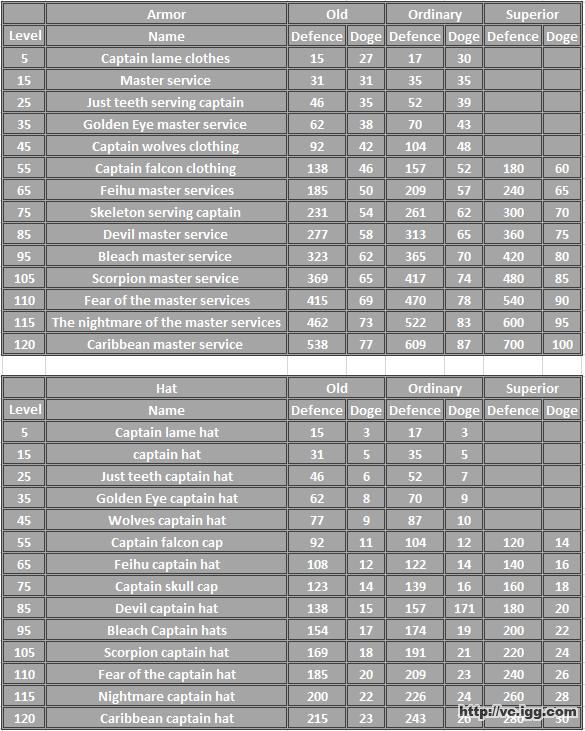 The amount of cloth required differs for male and female uniforms, and hats of the same type and level! So look at the numbers carefully.

July 16, 2012
realized I forgot the Sea Battle uniforms...added them

August 21, 2012
Added the materials for compounding to the charts for each profession's type of uniform and helmet.