[Events] Event - My life in VCO


I remember when I started playing at 2007 or 06, can' t remember. Didn' t have any sense what I was doing what so ever. I slayed goats in suburbs while my plants were getting ready and run around suburbs till I saw pyramids which pissed me off because I could never reach that guarded area really. I played like this for like a week untill I realized that map is so much bigger in this game. So I read a bit about game and understood that I have to become either adventurer or merchant to become rich in game. So I did, I became adventurer, had lvl 8 rider and I was all cool in sea. Had no guild at that time because that part of the game wasn' t clear to me. But then came exams at school and I had to stop...I even  forgot about the game until I had some kind of strange feeling that I have to try it again. So I did. Like 2-3 yrs ago I came back from dead and started fresh. Started on columbus, but understood that it was too small server for me to grow. So after reaching lvl 130 I decided to start fresh in MMP and made a new character. First I found a guild which could help me, and it was the most pleasant people that I could ever wish around - TheFamily. I learned so much new, for a year when Kal left, I became a TPC king on server. Boy that was a good time, so many tpc runs per day - nobody could ever imagine. I played the game just for that because i had so much fun, until I realized map finding is so much better hehehe. and so I keep running around.
Rate Delete Ratings
Comment
Submitting…

Signature
No, You're Newbie!


(feel already sorry for my bad english, but this event is funny)

I started to play in 2011, and going naturally in JOCKERS because i know some of them before. At first, i was pretty depressed than became a part of 1 alliance side, but still, the enemy side give a good challenge and funny PVP, so i just agree with the rule of the ally.

I remember, when i reach the level for pvp, hmm well, 140 is not pretty good but ... Tealc and i fighting much time 556Slayer, well correct word was " we are him prey", but sometimes, he became us prey too ! Especially when he was AFK ... ahahah
Sonntag also, we killed him when he was AFK and we needed to die 4 times before finally killed him

we feel so proud.

And became on alliance mean Siege city ! i remember at first, i was using to put skill into Axe for be usefull at war

and running into siege city with my axe and " thunder .... die" ...So surname started not far after this and this one was MeloDie

When i started being not bad, i  loving PVE just for my Jockers, because we can play together, sharing, laughing and dying aswell, because 1 ini with melo, when you don't die it look like a miracle.

Apparently, my Melo in this game love too much the floor.....

And one of my favorite fun ( equal at pvp), is the guild chat jockers, we perverse him with booster ! But when my wascaslave entered into jockers, that became more worse, and we changed the chat into an dungeon, full of my slaves. And he gave me Sadodia surname ahahah.

So i think, for a short story of my life in vco, i can say something like :
Melo is slaver, perv and sexual harass the lazy into seville (all because of Aeg),love her jockers and the floor.


The thing thats always going to stay in my memory happened on 25.04.2010. That is the day when we lost one of our friends, piratesally. To show how much she meant to us, players on Magellan server has organized an event. We all gathered on Athens dock, sent our condolences to her family. After that we went to high seas, lowered our sails and started sailing to Oslo. It was a biggest fleet of ships I've ever seen in game. Her brother had her loged in, she was leading the way. That was the day when we all united, allies and hostiles, to say one last goodbye to our friend. In my 8 years of playing this game I never seen anything like it. Its been 6 years since she left us. kent and MisterBig kept a statue of her alive in the city DanishFleet owned for years. This story is just a small token that shows she has not been forgatten after all of these years. 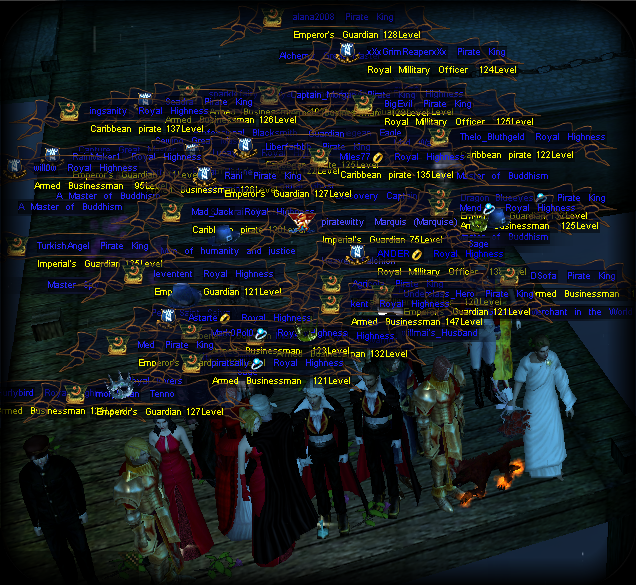 
Hi all
This thread is only for event purposes

Back in the days... my name was Cap_Glory... lonely player, business man, pro Treasure hunter (maps) and great profiteer buying and reselling.... that was a full time job back then....

Things got interesting when I was hunting a map in some suburbs... then a Minotaur spawns and kills my newb a$$....  but that wasnt the worst.... I come back decided to kill it fully prepared but then... Casanova is killing it... "Hey... thnx for the help".... naaah... wasnt helping... he walked away with my treasure..... omg this world isnt perfect!!!   after speaking to a couple friends yeah.... i get into NEPTUNE guild... full of great helpful friends with Morgan, Paul, Sloan, etc... respected and much more!!...  time to learn the basics now and specially... PVP!!!

Thats how it all begins, I grew stronger (nothing wow LOL) and soon liked the sea battle pvp... yeah ramming, grappling and shooting was all effective back then, there was none who couldnt be killed, just needed some smart playing!!

That way... I got an invite for Columbus expedition... yeah time for A$$ whooping in other place count me in!!!   That way i met lots of other great ppl there like CrazyCarl, StripX, Frontenac and more.. but then soon most of the job is done so, its time to try Dagama... dam nice ppl there... very cool friends and enemies.... Jack ofc, Paul (another), Outlaw and more... but sadly the server soon got empty... time to hit back MMP!!!

Good news are... by then MMP got crowded and the best part of it... lots of enemies!!! wait... enemies now are on friend side... but also friends on hostiles side!!!   daaam this server changing got everyone mixed haha... oh well...  PVP forever!!

In the end... Im still in MMP at Sunrise guild with great people... Pepe, prince, davide, Tilki, Zeus and all other cool guys.... Enjoying the rest of the time I have left to play everyday... by now life is different then 10 years ago.... A lot better!!!

My story is pretty much pvp, so here I leave you some of my favorites SS on battle results, BG, GT and such!!

NOTE:  To watch them I have to rigth click them and watch in different window  =)

Signature
<3 all my fans...  keep it up trying harder boys
Return to thread list