[Discussion] about the salve you get from west african pirate ship

There are 2 different quests that involve West African pirate ships

1) is beginner quest line; mission 82 help each others
in this guide topic
http://vc.forum.igg.com/topic?ctid=56409

2) is at seville there's a npc called spanish millitary officer around (116.2 -25.9)
gives you a mission called ( i require the assistance of the righteous men ) asking to liberate 10 salves and deliver them to Seville you can get them through the west african pirate ship
the salves will disappear after 90 min

I was unable to get the west Africa pirate ships to spawn for the SPANISH MILITARY OFFICER quest.
Even though the NPC works and the quest shows in the log book..

not teamed
took off sea mermaid and rulers glory
even tried with trade goods in the hold.
I sat in high seas outside Dakar and outside Las Palmas
and even sailed toward Tortue for a bit

my next idea is maybe its only for level 120 and below ??
or maybe its a one time quest and I did it already but the coding is messed up so it still shows??

the reward is 60 OMO - so you know its a really old quest.

IDK i got tired of testing.


IF anyone gets them to spawn please post what you did .. what level character, did you need trade goods? did you remove sea mermaid?  or anything else.. level of ship maybe?? seabattle level?

I took the quest from the SEVILLE npc "spanish military officer" 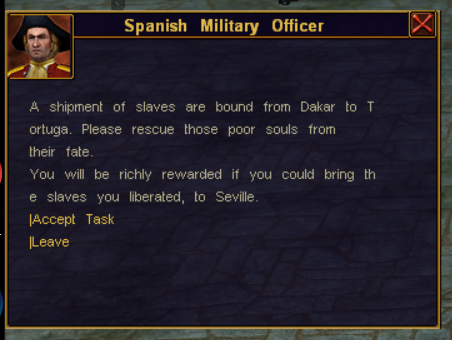 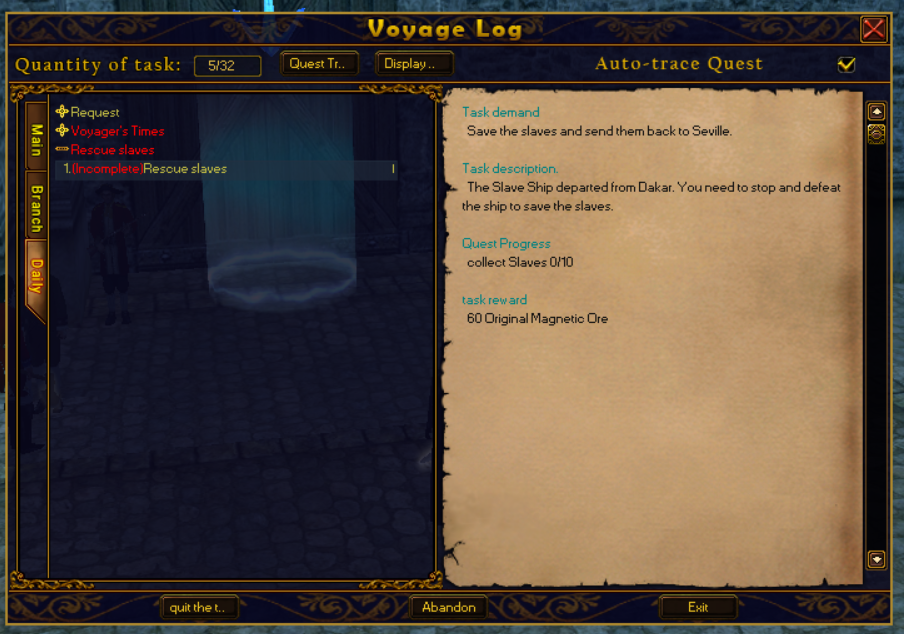 (THIS IS NOT the beginner quest line quest)

again I took off the sea mermaid...
and then I tried no sea mermaid with a trade good...

I tried at both Las Palmas and Dakar off shores.

IF you were able to get a West African Pirate ship WITH OUT being on the beginner quest line
please post here.


did you need trade goods?
what level is your character?
what level is sea battle??
How long did you have to wait for the ship to appear?
Did you keep moving around or did you just sit off shore?

The voyage log quest text actually does not say to go to Las Palmas.... just to Dakar...
and the route of Dakar to Tortuga is only mentioned in the NPC screen (see above).
so I need to know exactly where you got it to spawn ..coordinates if possible or at least say Dakar was still on screen or I sailed to Tortue... etc..