Hello, about two years not had the opportunity to play, who went on a character on server 1 player....I ask for help in transferring the account to a playable server...at one time I bought more than 100,000 points supporting the project financially and helping the development....ready and further but not on a with 1 player...

Unfortunately there is no way to transfer the character for free. You have two options:

Since you said you already spent 100k item mall points, option 2 seems to be much better for you. 1k points more shouldn't be too expensive, considering you wont have to wait half a year for the transfer event.

Budok Rated on 2019-10-05 11:10:01
isn't it weird the fact that people who supported the project financially must pay money to continue to support the project ?)

Budok Rated on 2019-10-05 11:21:08
this brad demand with player cash which contributed on maintaining project more 100k, under this he not on their will requests change server, and in ties with those, that server on which he played died....maybe then just give me back my money and I will use x for its intended purpose...

DSofa Rated on 2019-10-05 19:24:28
Umm no, I don't see how its weird. Lets use an analogy. Lets say there's a food store next to your house at which you purchase groceries every day. That supports them financially. Lets say one day they decide to move out of your neighborhood to a different one further away from you and now there's no food stores left that are close to you. Would you say the food store is obligated to buy you a brand new house next to their new store, just so you could continue purchasing in it and continue supporting them financially? Of course you would consider that idea to be ridiculous. Would you say the store should give you back all the money you spent in it, just so you can buy a new house next to their new location so you can continue supporting them financially? Of course not, that's also ridiculous.

you are not the only one support the project....

Sounds to me like it just too expensive for you....

well you are in luck...
credit transfer event happens 2x a year usually end of November and end of May.

So just wait 1 1/2 more months and transfer all your characters for cheap while you can.

quote:
isn't it weird the fact that people who supported the project financially must pay money to continue to support the project ?)

No, all MMO games either get money through monthly subscriptions or by selling virtual items that are needed to level up. (ie. you continually pay).
Remember IGG is a business so making money off players is what they do or there would be no game at all.

Other games I have played do not even offer server transfer.... Though IGG sort of HAS to offer transfers, because the server merge tool is broken.... but with a merge, you wouldn't have a choice of which server you merge to.

no, but yes somewhat...
NO, you can create a new character on the server of your choice.***
It only takes about 2 days play to reach level 140 and maybe a week to get to 155 ... join a guild so they can tell you how to get all the free gear and how to do the cheap upgrades.

It is highly recommended that if you have not played your character in the last 2-4 years ... that you create a new character (transfer any wanted items and discard your old character or use it for a mining/logging alt) . (unless character was maxed and in Fallen or higher gear - then wait for transfer for that character)
1) to avoid version upgrade bugs
2) to get all the free items from the lower quests and timed gifts

I know the beginner guide is a bit TLDR for some people... but there are so many hints for players follow along with he guide as you do the quests ... even though you think you don't need to.
New / Beginning Player Start and Quest Line Guide


*** Make your new character on a new account using a different email address so that you can trade items between characters (trade with your old character after transfer).

YES, there are now a few items that are needed for level 170 gear that are only available (in the quantities you need) through the item mall.
---------

ps. if you make a new character USE the beginner guide!!! There is 1 game breaking bug that if you do not follow the guide you will have to make a whole new character and start again or possibly wait days and days for support to try to fix it.

there is still a VIP system but is is based on yearly spending and in truth it doesn't help much with anything except when unbinding certain higher level items and possibly getting quicker response from support. (there is no live support for VIP anymore and IDK if they get any special yearly rewards anymore)
its starts when you spend USD $399 within a 1 year period.
here's the old page describing VIP

ppps.
When you start the game the "update server"  number 1, 2 or 3 does not matter (it just checks for game version updates)... the server that matters is the one you choose from this page (below);
Battle server is only for events.
So there are 4 regular game play servers;
Magellan & Marco Polo, Zheng He, Columbus, DaGama & James Cook. 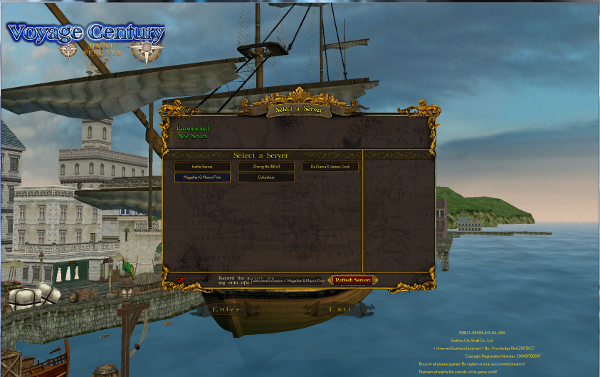 Budok Rated on 2019-10-06 00:53:28
For me 1000 points is a little bit... It's a shame when so greeted.... Start the conversation with money...or asking to go out for a walk six months...I'm not one supported the project financially but still...there must be at least some sort of gratitude...I will not agree with You, that all pay in the games...in Your project 70 % of players do not use dollars at all..And to the same I was VIP player spent more 2000 $ although much more....I would make a new character but who will give me back 2 Huge Hydra heads? With this attitude, you cool down to the game, especially to its financing...

You seem to be unaware of how a game based on microtramsactions work , 100k is great, but these games are designed to be never ending sinkholes.

Yes you will have to pay them , rant all you want , it wont change things ,  you're not entitled to free services.

People have lost their entire character(s) due to server problems, Igg did nothing to rectify that problem.

forum moderators dont have free will boi their only ground is " protect the igg at all cost " since igg pays them like 5k im each month ? ( forgot the exact number ).Its impossible to convince them with your arguments  since they wont bite the hand that feeds them.They not represents the community they represents the igg simple as that.

(See ya next year xd)

DSofa Rated on 2019-10-06 11:05:53
Mr. troll spreading false information again. Look at my post history and you will see me going hard against IGG when I feel they are doing something unfair. But of course you will not do any research, its much easier to just sit there and make stuff up to troll the community.

Budok Rated on 2019-10-08 11:06:20
well, biting the hand that throws food in your booth is a bad idea..after all your salary directly depends on those persons who support the project ;)

xanthian31 Rated on 2019-10-08 14:30:55
Above reply Translated:......how funny) are you against?) are you talking about paying money to them?) do you think it’s against? what idiots do you see in us? correctly he said for wages you are ready for anything! and there is! and replacing concepts is low ... but in this case, you helped thanks! I saw the true attitude and now there will not be a single dollar from me!