Hey guys, i always played a RMO since i was little when i started this game, and now i want to make it my main.
I'd like to dable both in pvp and pve a little.
so here are my questions :
1) What skills do i pick for land and sea : for land i wanna main sword but i really don't know what to go for, all i know is that launching stab sucks, as for sea i know people go for spalsh -> potshot and ignore the left side
2) What professions should i pick ? ship building seems nice, i don't want to spend millions repairing my ship
and first aid seems nice, besides those 2 i don't know
3) As for ships i suppose it's battleships all the way yes? also can you still get the black pearl ? ( please say yes )
4) What should i spend my ability gold on ? voyage / shipbuilding / first aid / sea battle ?

I can't  answer the specific RMO questions but:


2) What professions should i pick ? ship building seems nice, i don't want to spend millions repairing my ship and first aid seems nice, besides those 2 i don't know

*ps millions of coin is nothing now... you get 1 mill by 26th quest in beginner quest line. Now a days you spend Billions...for upgrading rank skills, Generals, forging, ship enhancement etc... this is why doing HI caves every weekend is crucial to the game.. its the only way left to make good money.
** pps your profession is RMO and the main profession skill number/level now goes up to 170.. every thing else is called skills (old skills, profession sea skills, profession land skills, profession production skills).... and skills still train to 120.

You can and should learn and train ALL of the old SKILLS offered at the skill tutor. Promotion books are no longer required ie no phase 1,2,3.  you will have earned enough money to learn all skills and use the "points" by about 1/2 way through beginner quest line... so buy all when possible.

Profession PRODUCTION skills (ctrl +s) i would not choose any until you need them (as you are limited to 5).
This is why everyone has 3-4 alts.. one for logging one for mining one for fishing one for planting ... make alts on different account (different email needed) so that you can just open the client 2x and have both characters online at same time for trading or for playing your main while the others work (plus u will need the alts warehouse space for the logs, metal ,plants etc)

3) As for ships i suppose it's battleships all the way yes? also can you still get the black pearl ? ( please say yes )

Black pearl is only a lvl 13 ship (there were a few 14's from one special item mall event) but if you see a black pearl for sale in a booth -no event in many years - its most likely a 13 ... and I believe those can not be upgraded...so are a waste of space... but I'm not a big PoC fan.
We have lvl 15 ships now.

4) What should i spend my ability gold on ? voyage / shipbuilding / first aid / sea battle ?

Please read the first few pages in the beginner quest line guide...
that is all covered there. (mid way in post #2) LINK
depends on what ship u will be using.. if you use battle ship then get sea battle.. if adventure ship then get voyage.  Even though ship repair at shipyard boss is now considered cheap ... i suggest it in case you are at sea when something happens (always use sea mermaid until u can get rulers glory to avoid storms... lvl 11+ ships are faster than the pirates that attack when you carry goods)
first aid and alchemy have healing skill help.

Join a guild right away, you will start to earn points from daily quests which you should start to do from quest giver in athens/seville. You can use these points (guild valor) to buy nice upgrades from guild headquarters and eventually a lvl 13 ship. 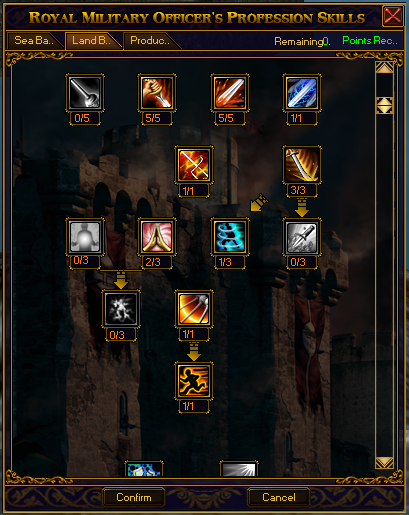 This is a good build for both pve and pvp. I have only tried Armour Rend so can't say if Final rush would be better.
Launch stab is amazing - increases attack power! and when you use the profession skill, you have maintained attack speed (you have slower attack speed when you use it without profession talent) and you can critical stab with launch stab, which is when you jump in the air and do more damage - trust me its good.

Stab reduces accuracy of player if successful hit - really good for 1v1 in pvp and for monsters to miss you.

Also potshot build is great, the left side is more for pvp/high instances boss killing so stick with what you have


- most people will be happy to help you in the right guild, and ask them questions, lots of us have played the game for many years and know a thing or two

2) You need Medicine and Alchemy - two stunts in these skills help improve the recovery of HP+SP from potions (Healing from Medicine and Effectiveness Enhancement from Alchemy).
-Medicine is a hard/long skill to level so I would use an ability gold here.

You need the Main 4 at 120: Voyage, Seabattle, Eloquence, Barehand fighting. These unlock Freezing armour you need for many uses for land and sea.
- Eloquence is a harder skill to level, so I would use an ability gold here.

Other skills you need are Shipbuilding, Foundry and Sewing.
- by leveling these skills you learn the stunts () which help decrease the rate that your durability goes down on your gear (foundry for weapons, sewing for clothes)

Swordplay and Barehand fighting are easy so don't waste ability gold on these. Work on falchion training after  because the skill Soul of Sabre (SoS) will help you kill multiple mobs where sword you can only hit one at a time as RMO. Can't highly stress this enough.


3) Battle ships give you more cannons+ hull and sail durability, but are slower. So having a raiding ship is good to travel with and eventually when you refine your figurehead enough, you can use a raider as your main battleship.
You should have a lvl 10 raiding ship and battle ship if you're on a new character.

You should look at the quest guide for 120 sea jewellery rewards, a quick start to becoming stronger at sea.

4) Covered in the skills section

Easy skills to level - swordplay, falchion, barehand fighting, sea battle (you can sit in a battlefield and kill ships for an hour, using xp scrolls, very easy as RMO with potshot path)

Voyage is not too hard either, xp scrolls and finding storms (give really good xp) and if you travel a lot, you get a lot of voyage xp so up to you.

Harder skills - Eloquence and Medicine - also shipbuilding needs a lot of materials and if you don't have money, will be a good place to use an ability gold on (higher level of shipbuilding gives better repair for your ship)


Check out the skill guides - really good way to start getting 140 gear and teaches you how to add refines++ on your gear.

Thank you kind sirs!
Also i read somewhere that if join a guild early then i wouldn't be able to complete some quest down the line, does it still apply?

BenderBR Rated on 2019-02-24 16:41:30
If you mean the "join a merchant alliance"quest, you can join a guild before this, all you need to do to complete it is go straight to the docker rather than the npc the quest wants to go to

The join a guild bug... no one wants to try and mess up their character so just wait till yo get past that point (as outlined in the beginner quest line guide).... it should only take you 1 days play time to reach that point.

Ps dont waste ability reward gold on eloquence.. you get a free scroll that takes it to 100 in the beginner quest line

First aid is not hard to level.. in fact all skill tutor skills are not THAT hard to level though you will need an alt or a patient friend.
Follow the guide on how to level old skills fast:
Leveling old skills; general skill to 2040 + getting Rep for nobility

if you dont have access to item mall.. then you have to start with lowest potions, logs and work up to the next level of potion or logs,,, but the theory is the same as outlined in the guide.