This is an old thread that got bumped because some questions were still unanswered.


sadly i have to say the New Noble Merchant Charm is bugged.

Normally you should get 110% more of the silver you get normally. But you get around 90% more so 20% less than it should be and 10% less than with the Magnate Charm. 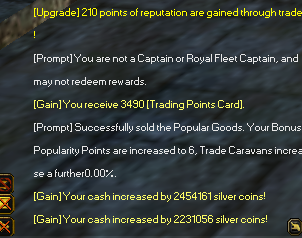 Please fix soon   and thank you again for new charms

Edit: i Guess the the royal Merchant Charm it will give even less silver. (since my guess is that all over the 100% from magnate charm will just reduce the income again)

Here Screenshot Of the Charms: 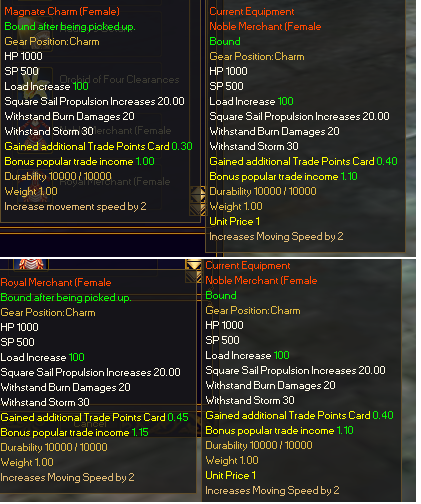 He used Magnate Charm and me the Noble Merchant Charm.

We found out that the 2nd number is the normal trade profit and the first silver amount is the 1,10 bonus.

So all is fine the row was just confusing a bit

Here's a screenshot of that test we done. 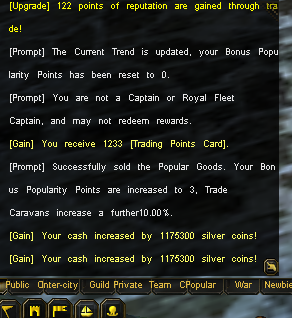 Here Screenshot from me  from test with sofa:

Edit: we sold both 100x Korean Dress a few seconds after each other to a city where it was popular.

Edit2:
Tomorrow we do a test on TPC if that works fine too


Edit3:
TPC does not work fine.... test results see below

We did trade runs together, in a team of 4, which means we all got 30% more profits. Some of us were wearing charms, some weren't. The trade runs were done at the 15x multiplier, which means we sold 3 small goods before selling the main good. Every character had the same trade frequency and it was his first trade that day. We made sure to have the same amity in the cities we were purchasing and selling goods.
We purchased and sold the same amount of goods. We also made sure that all the players were in team aura before selling. All the chars had level 120 Eloquence and level 12 Purchasing skill.

We kept the minimum amount of data as possible. Amount of goods dont matter since we all sold the same amount, except the 4th person which sold around 20% less. We kept him as a reference. We also left out the locations of where we sold the goods as we all sold them at the same city.

According to the results it seems the Noble Merchant charm is bugged and the TPC gain is not working at all at the moment. So until this bug gets fixed, its recommended not to buy this charm.
Rate Delete Ratings

DSofa Rated on 2018-08-11 06:33:51
Nope, no one has the Royal Merchant yet. I guess Flamewars will be the first one to get it since that's his only hope to get away from this issue. He paid IM for the Fashion Mogul Charm, then he paid a lot of TPC and silver for charms up to the Noble charm, just to have it not working... We will test Royal Merchant as well as soon as he gathers enough TPC for it.

The 5 trade charms in order of upgrades: 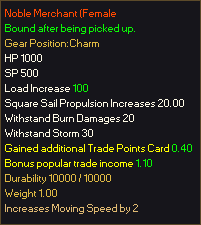 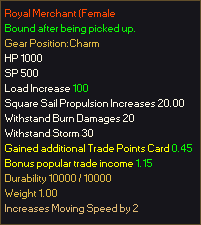 Try it with charm and without charm.

DSofa Rated on 2018-08-11 06:30:59
Our test results have been posted above. Player with highest silver gain was wearing Noble Charm, but at the same time he received the same amount of TPC as the guy who wasn't wearing any charm. That's wrong, player wearing the Noble Charm should have received the most TPC and that wasn't the case here. So we conclude its bugged for the time being.

yes the no Charm Chars get less silver , because in case of Silver the Charm works fine...... But the  Player with Charm (Noble and Royal) should also get more TPC but instead they get less.... something wrong the Calculation there.

if u have low amity with some nation u will receive less tpc and less coins, did u guys have same amity with nations?