[Zheng He] [Solved] Help! The key of the pyramid-I can not pass

Please, help. The task is written to find the key and enter the pyramid to pass the quest. He knocked out the key, entered - the task does not give up. What am I doing wrong? Or is this a game bug?

There is a NPC close to entrance. Get a pyramid key and talk with him before enter the pyramid.

Thank! I passed the quest!

check the guide section its the first topic i think

There is a lot of good beginner information at the beginning of the Beginner quest line guide.
Even though you are a bit into the quest-line already, I suggest you read the info so you do not end up making common mistakes.

Beginner quest lines are now broken into separate quest lines.  Do them in the following "order"
(it is suggested you jump around between some of the quest lines.  Such as do the 120 Knights vigil when you reach 120 in the middle of the beginner story line or do Voyagers times and daily quests when you need a break);

Instances you can do daily; see the instances part of the list of guides
Beginner instances; Crete (sea) Battlefield, Crete Maze copy (Instance), Straight of Gibraltar (Sea), Mallorca Instance, Madagascar Instance, Bombay Instance. - you will need the drops from these instances to refine/improve the stats of your equipment and they give a lot of experience/leveling points.

xanthian31 Rated on 2018-10-28 13:08:35
I did not include London Daily because killing the pirates is extremely hard for a beginner and usually they do not know anyone in game (to help them) before starting the game... as for valentines..I also remember only being able to do a few of the quests and never finishing the rest because they were also too hard

xanthian31 Rated on 2018-10-28 13:13:30
Profession leveling is easy now a days... if you do the entire beginner quest line and both knights vigil quest lines a player will be about 143 in profession level. Leveling weapons and barehand is easy if you do the instances... it is just the labor skills that are left out of the leveling when doing theses quests.

Flamewars Rated on 2018-10-28 14:54:07
u sure with the lvl 143? I mean the daily quest of Valentine NPC not the storyline.... The daily you get a love letter and need bring it to Natasha in Athens and get lots of prof exp for this 2minute quest. About the london daily yes its hard but usally ppl need help anyway during the questlines with bugs and stuff and if they aware of start london daily as soon as they can it can help :D also only last quest is hard:)

Ill start a new post so it doesnt get hidden in the comments:

I REALLY wish it did not give "rosebush"... wait wasn't that what we grew for the wedding bouquet.... its actually suppose to be Rose Rain .. anyway, will suggest you throw that and fireworks to the ground so you do not LAG out everyone in your area.
(not like most people would even know how to light the firework w/ flint u have to buy)

I do not know if there is a level requirement for that quest....
I will see if i have a alt under 120 and attempt it.

Because my suggestions above are for starting players under 100 I will not recommend the Valentines day quest...
However I will add it to the list of "when you reach level 120" suggested quests in the beginner quest line.

Flamewars Rated on 2018-10-28 15:43:57
you can actually use the Fireworks by right click dont need flint :D Also you can use it on HS looks nice :D About the Rosebush i usally just use it by right click too not thought about it could make other players lag but also not heared about that so far

Flamewars Rated on 2018-10-28 15:49:16
also i think you could add the arena quests if i saw correctly you dont have them there Since you need help you could maybe add a section: fast progess with little help there you could add low and high lvl daily (i think first low level daily open at lvl 40 or so and give you like 40 lvls if i remember right) arena Quests open up at lvl 60,90 and 120 also give nice exp and are fast and in this section you could probably also add the London Daily then... or maybe if i have time i should make a own guide which is short and easy but give hints to ppl what is important these days where to get money what generals, Crete and Ranks are etc. Lately needed to explain same stuff over and over again to old players coming back cause usally they dont like long guides and i am not even sure how many guides i would needed to link them to cover all :D...sadly its lot of effort to put such a guide

xanthian31 Rated on 2018-10-28 16:23:52
Ill have to check arena quests when they open and how hard they are with my alt.......... land and sea daily's do not open until you are level 120 (though you can do Petro fortress quests at lvl 10 what beginner can do that?) The dailys are already suggested in beginner quest line in120 section as is silk route and others that open up and actually show in voyage book. ..........(with next major update i have to totally rewrite beginner quest line so will add separate page on over 120... but right now its in quests text where u hit 120 between #86 and 87. Generals are not important to players under 120 or even really under 150 so is not included (suggest you write general guide AFTER update.. would be much appreciated!) WE dont have anything on Crete event.. so feel free to write that too.. ranks we have a guide on already. Problem is no one wants to read anymore they all expect it to be given... its old school vs new I know.. sigh and didn't know you can just right click fireworks.. guess they got rid of use of flint last major update... and its been a while since i did valentines totally forgot about it. Thanks for the reminder.

Flamewars Rated on 2018-10-28 17:43:02
i did dailys with the last alt i had before lvl 120 i think it was like lvl 40 and then jumped to lvl 80 after low level sea instance (malta skirmish) the land one did not open same time though and the big dailys opened later as well (probably big dailys at lvl 120) and no problem for reminders... about guide if you remind me after next patch i might do one or probably write before cause after patch will be busy :D

Arena quests...
I definitely never finished writing that guide back when i hit a leveling wall..
Arena Quests Guide

Ill have to add to it

*edit*
I believe you are correct on arena levels... the very first quest in the text says other quests are level 90 and 120 at other npc.

Now there are quests for 140 weapons and jewelry?
Knigstv Vigil II Quest line - did not appear

What level are you?

**edit**
just remembered that is why i have the Bimini/Atlantis quest listed between the 2 knights vigils (see below)...
use to be , and may still be you need to do a few Bimini quests to get enough experience to be able to do the 140 Knights vigil.... though I am not certain anymore.  About 2 years ago, they changed leveling amounts so that you reach 150 faster, and I have not tested it since the leveling change

The game voyage log does not differentiates between 1 and 2.. they have the same name.
"The Knights Vigil"

If you are below 140;
continue the beginner quest line and do daily quests from Athens/sanctum and do the valentines daily quest (Seville dock).  If you need money farm North sea instance on a double drop card.

Instances you can do daily; see the instances part of the list of guides
Beginner instances; Crete (sea) Battlefield, Crete Maze copy (Instance), Straight of Gibraltar (Sea), Mallorca Instance, Madagascar Instance, Bombay Instance. - you will need the drops from these instances to refine/improve the stats of your equipment and they give a lot of experience/leveling points.

The daily Valentines task give a high amount of experience for very little work.  Do it daily.
At level 60 you can do the low level arena quests and they give good experience as well.

Make money by farming the cannon and figureheads in North Sea instance (use double drop card when possible).... Until you are strong enough to farm Hurricane Island Cave instance (farm cannon operator jewelry)

If you can get someone to help you kill the Rampant Pirates in London Suburbs, do the daily task  "Request; Supply Officers Request" (level 1 to take quests) from the NPC on London Upper dock (next to the mid-summer event envoy).
Keep all items from that quest; You will need the items from that quest in the future.

I'm 144 levels. Part 1 is completed, the second has not appeared and that's it. 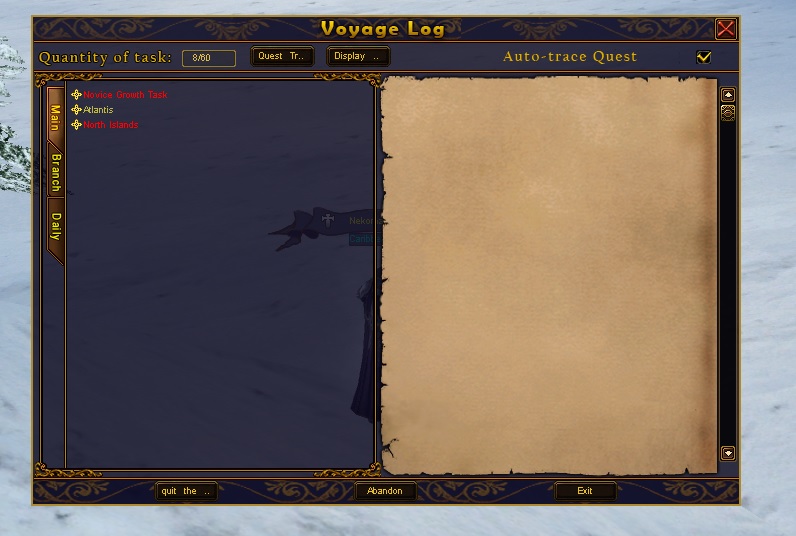