My Question @ 12/09/18 16:38:32
hello, there is 150 unbind tool on my toon's item section and I would like to see the burningflame ship char as unbound. If you help me for it I ll be very happy. tyvm for your help and interests. I hope you will do it quick this time .


Changed title so you are not insulting the only person who can help you.  - Ele

since this is now "solved" i put burning flame in the title for future search purposes.  - Ele

Often times you need to leave your character online for a 24-48 hour period.

Obviously I do not know what support told you... but when I have needed support because support is on China time...  They have had to access my character/ Characters inventory when I was asleep.


Also not sure they will unbind a burning flame unless you have them transfer it to a character that shares your IP and maybe even computer ID.
AND
You may need to be a VIP to have this done.
(As I have said before; support is a craps shoot... some will and some won't do the same actions)


PLEASE let us know if they will/ do unbind this item for you.
We do not have any threads about the Burning flame being unbound or not.

we also have this thread,
but the player never came back to say if they would unbind or even trade it;
what i need item to make greenflame leader for unbind ? claudius Rated on 2018-12-29 03:23:13
while that may be the process n logic behind it the reality is its A bullshit in rational terms firstly every player in the top 10 is using at least 2 or 3 burningflame leaders on sea and for it to be a vip only advantage is a load of horse. GM need to wake up do some homework n learn where the meta game is at.

part of LS reply :  case is still being worked on by our team.

Flamewars Rated on 2018-12-21 05:51:37
write a new answer in your ticket. Add your server, char name and say that your Burning Flame Leader is in the first slot of your Ship Equiptment Column (place it there).

Seems kind of shitty some players get stuff unbind in 1-2 days and others waiting almost two weeks and nothing. Good job IGG

@Flamewars : I attached also google map for them but have not worked till now

xanthian31 Rated on 2018-12-29 10:22:16
Put your ticket number in your post and maybe FOK will see the post in forum and go look at it. Also make sure you name the item correctly (in your emails)... I believe you are asking about a Burning Flame Leader Ship Auxiliary (you say "burning flame ship char".. which might be confusing to support since they dont play the game).

FunofKing;
could you please just give an answer if it is possible to unbind a Burning Flame or not.
If it is only available as a VIP unbind service then explain any conditions that must be met (one vip unbind per month or what?)

u not need to be vip as my understanding just have the unbinding tool 150. that's like saying are 150 unbind tools only IM.. Its an IM function not a vip feature. That's how the game was designed, igg dont actually know the rules they just run a license, sad truth. FUNO is the only 1 knowing the rules. Hence why they spend 3 weeks waiting to ask him n double check so as not to screw up.

Signature
There is no greater sense of accomplishment and achievement than hard work.
Money will not bring you happiness but it can bring you plenty of problems.

Obviously the 150 tool will unbind SOME items by just clicking (Figureheads and items worn by the character except belief and apparatus).
but for other items you need supports help... note the description does not include SHIP Auxiliary, shields, belief, apparatus.
*mouse over of ship  items says Gear Position; Auxiliary Item but actual slot says Ship Auxiliary
**these items may not be un-bindable even today in other versions of game - they were not un-bindable in the past in other games  LINK 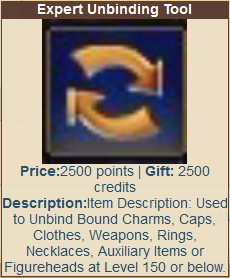 *we could argue that Auxiliary IS; Ship Auxiliary.. but i  have a vague remembrance of character belief (Faith) or Apparatus (Equipment) also being called Auxiliary slots... but cant find reference as it would be Old old old...

In the past, some items were only unbound and transferred to another character belonging to that person and only if that person was VIP.  (notably ship auxiliaries... which MAY have changed as of this thread... never heard back if player was VIP or not... but player; NoobSauce does not say "traded" in his writing... so I assume just a regular unbinding.)

Most likely VIP was required in the past, because of the time involved checking IPs for the last 3+months to "prove" the accounts belonged to the same person and cost/ rarity of items. - They would not just unbind some items (so they could be sold/ traded).

I think VIP's got 1 free trade like this per month ...later they had to have the unbind tool.

Links to people saying they had to be VIP:

4/15/2016
- VIP needed; do not know if they meant Hollowness/ Hell raiser or certificate of Overlord

4/28/2013
- looks like rules have changed quite a bit since this post but VIP is mentioned in this "rules" post (remember everything prior to 2013 got deleted unless replied to  with forum change)
But back then it was Ship Auxiliaries by special services (VIP) only.