I wanna change my nickname and stay on the same server it says. Name Changing Sign-UP Time: now until 11:59pm May 21st EST(GMT-5)


but when i try to do it , only want me to pay 500 credits but i dont see any option to fill in the name i want!

Please READ very carefully and follow the instructions on:

*** NOTE***
Name change only works if your toon name has illegal (letter/symbol) characters in it.

In addition to Ele's reply.
If the option is not there, then your character doesn't have any illegal characters (letters/symbols) in his name.

i know certain ppl that change name every time is up on mmp and is not spending IM and their name has not illegal characters, so that event work partially for certain player that know change their name, ask sirblade aka witchhunter for more info before he change his name again.

I applied my alt 3 times so far. It actually has an illegal character in his name, but they never changed it. They did take the credits from me.

Applied it again, for the 4th time. I'm interested to see if the same thing happens again.

xanthian31 Rated on 2018-05-20 17:05:18
D, If i remember.. your alt has an underscore in its name; _ .... I tested making new characters and the only non letter characters "allowed" are the underscore and minus ..which are the same key on an English keyboard. I have a feeling that the programmers accidentally forgot to disable that key... now how that affects the character renaming... Perhaps portions of the code got copied between programs?... I am still wondering if a person has a illegal character other than underscore or minus do the text boxes show for them? If so, does the line that shows correspond to the character slot location on the start/ dock scene?

My alt has a non breaking space in his name. You write it by holding ALT and then pressing 255 on numpad. Its an unicode character, works well under codepage 1250, but ever since the game switched to codepage 936, the game displays non breaking spaces as a chinese symbols. Because of that no one can pm me and I'm afraid if something happens to that char, GM won't be able to fix it, just as he couldn't fix my guild when the leader got kicked out in the past, so he had to remake the whole guild because the old one also had non breaking space in its name... you remember that struggle. I have a lot of mats on that alt, invested lots of time into him, would suck to lose him that's why I keep applying for a name change but it just doesn't work for some reason...

As for the allowed characters, I looked at the script and dug these rules.

1. Form wont validate if there are no backup names written (if you leave the fields empty).

2. Form wont validate if one of these words are used:

3. Form wont validate if the name has a space as one of the characters.

4. Form wont validate if the name has more than 15 characters.

And basically that's all it tests for. If you follow those rules, it will allow you to sign up for a name change... Now what happens beyond the scenes, I don't know.

xanthian31 Rated on 2018-05-21 01:16:43
Oh that info is good to know!! thanks! ok now the obvious question... the alt name shows with a question-mark above... do all alt+key characters show up as a question-mark? And are you having to change the boxes to see them or do the text boxes auto show because if the illegally spelled name? And does the name with the question-mark get auto-filled in or are you typing that and its getting translated incorrectly? Yeah i know if i just would have make an illegal named character back in the day...sigh

xanthian31 Rated on 2018-05-21 01:23:56
ps you might want to try a totally different name and shield it in your next posts... its possible someone one stole the names you have tried?? (and they couldn't just add a number since its an illegal name?) just guessing.

DSofa Rated on 2018-05-21 10:46:19
That question mark is actually a replacement character, used to replace an unrecognized or unrepresentable character (�). It appears automatically. Even though the IGG's website is encoded in UTF-8 and should recognize the non breaking space, for some reason it does not. My suspicion is that the background PHP script pulling the name from the database and echoing it on the site doesn't work with unicode characters very well. As for the second part of your question, the name automatically showed up for me because it has an illegal character. The question mark automatically showed up instead of the non breaking space. This is the first time I posted this, so the names were not taken for sure. We will see what happens tomorrow.

And there we go. Operation succeeded. 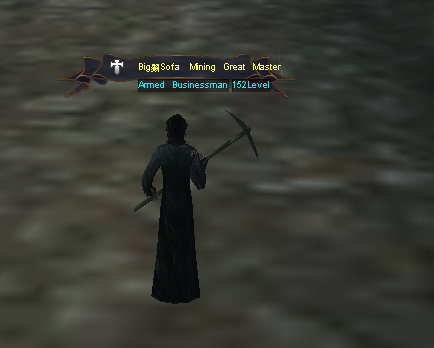 Also, that censorship I mentioned in my previous post doesn't mean anything. Can easily go around it and pick an offensive name. Even if its clearly against TOS. 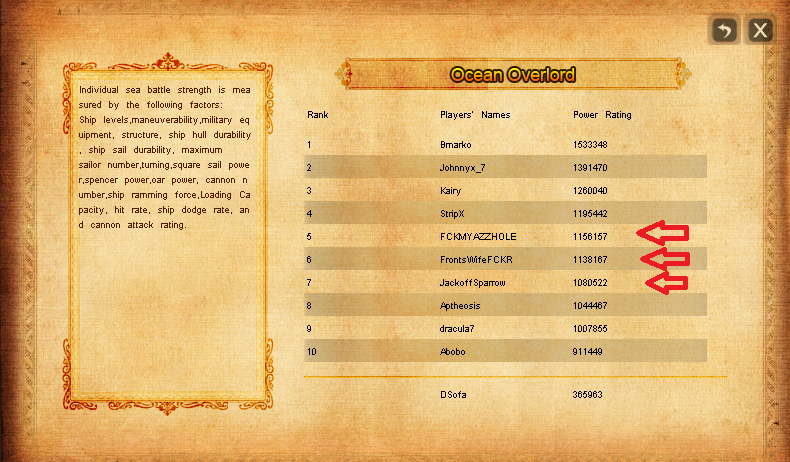 So this level of incompetence is just beyond my comprehension. They should fire everyone working at IGG.

VivaFnatic Rated on 2018-05-29 18:50:15
Damn they should do a name change for them maybe if enough people complain they will do it. Pease submit a service ticket at the following link http://service.sns.us.browsergame.com select your game voyage century then click illegal behaviour then relevant data and fill out the requested information. They will get back to you as soon as possible.

DSofa Rated on 2018-05-29 23:08:03
Yep, if you look at the post above, my first name change was submitted in 2015 so that's 3 years ago. So for the past 3 years I've been paying regularly to have my name changed and its not happening. The names against TOS are just the icing that shows really how incompetent IGG is at managing this game.

them is perfectly decent noble English names, probably find them in the electoral roll.

Signature
They say that human experimentation is illegal....in your case it was not illegal enough

Okay, this is what support told me.


We do apologize for the wait. Regarding your problem, we are sorry but currently it is only available to change the name during the migration among servers. We do not have the name-changing service to change name if you stay in the same server.

So apparently if you don't change the servers they can't change the name for you, even though it has illegal characters and you paid for it.
Rate Delete Ratings
Comment
Submitting…

That totally DOES NOT make sense because name change is done first and you stay on the server... Then after it is completely over you sign up for server changes.