[Discussion] When is next character server transfer? April 2018

When we had last time sever transfers ? Also FOK  can you ask them for an server transfer period please . I bet they are some ppl who wants to transfer from a server to another especially when there are servers so low populated . i need to transfer too . !

Last transfers were may and November 2017 so we should see a transfer time coming in May, probably around 10-15th unless they do something differently. It’s been requested a few times now so hopefully they will do one but if a patch or something if being worked on to be released soon that could delay transfers.

was mentioned by forum mod as last transfer time.
The actual transfer happend on May 31 so guess in November it was at November 22.

so was basically june and december but yeah in theory may and november....

For reference;  As you can see (in below list) we have gone from 3 transfers per year to only 2.
The 2 seem to happen during Summer break/ holiday and before or during Winter break/ holidays.

The dates will vary depending on Battleground season (must be completely over) and medium- large updates if the major bugs are fixed.

To transfer when it is not an event:
Send a email and get a ticket from the Service Center.
Include the following information;
account name, character name, current server, and  target server - for each character you want to transfer.
(you can have up to 4 characters per account on a server)
(there needs to be an open slot - at dock start/select character screen on that account/server in order to transfer)
http://service.sns.us.browsergame.com/tickets.php?gid=5
***edit 4/19***
It will cost 1,000 IM points for each character transferred  (we have been told - see below- they have you purchase 1,000 special services packs and that pre-purchase of the packs, before sending the email to support, seems to be ok). 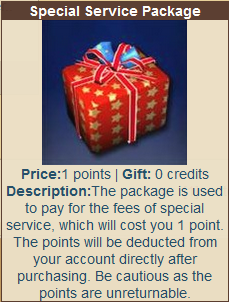 
for more past event info, just search on "Character Transfer" in the news section
http://vc.igg.com/news/search.php?key=character%20transfer&p=2

**WARNING**
Characters disappear during transfer when;
the character you are transferring is in a game start position 1,2,3,4 (on the dock)... and you already have a character standing in that slot on the server you transferred to.


Credits
are earned from buying non-sale IM items or can be "made" by exchanging forum karma into credits. Or during an event, others can gift you their credits.
karma exchange page: http://vc.igg.com/bbs_credit/index.php

Karma WAS earned (Prior to March 2016) in the old forum by participating in forum events or given by moderators as a reward to those who had written helpful posts and/or guides.

If you want further information on transfers read this post; Last transfer's notice, rules and instructions
most likely all will be the same next time:

ledhed Rated on 2018-04-19 00:05:38
Thank you Elle for being so fast to respond with a huge list of usuable information . I would also like to thank the others who contributed . At times like this I miss the old karma awards the most . But NOTHING prevents me from saying " thank You ' .

ledhed Rated on 2018-04-19 00:09:48
welcome , considering your voyage through the game , you now are an " elder statesman " the irony is not lost on me . For myself it is great to see you back and as usual , "contributing " , something I feel you never got enough credit for.

xanthian31 Rated on 2018-04-19 16:52:44
special service vouchers... thx... now for the big question have you ever bought them ahead of time or should you wait until they tell you to buy them? (buying ahead would save an email ...maybe) ... what/ which should we suggest to players?

VivaFnatic Rated on 2018-04-20 15:45:03
This is the last ticket i sent in My Question @ 02/24/18 17:20:11 hello I purchased 1000 special service packs and would like to have my character FeTTyWaP transferred from dagama server to Magellan and marco polo back-up names 1.Neutralimanti 2. Don't_Hit_Me Please transfer URGENTLY You need to list back up names otherwise depending on gm if your name is taken they will add a number to the end of your name

Wanted to bump this back up top since it’s almost May for funofking to see. We should see a post for server transfers soon.

Well last years was end of May or somewhere in June, so should be few weeks more.

Bumping again so FOK can see since a lots been happening. We need server transfers it’s time!!!

maybe after the crete schedule ends on the 13th?? IDK

They never give us warning ahead of time... it just shows up usually at about 2 days into the name change time.